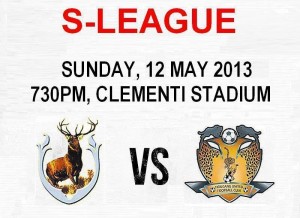 The Hougang Boys will travel to the Clementi Stadium on Sunday evening, to play the rescheduled match that was abandoned way back on 13 April 2013.

At that time, the Cheetahs were in low confidence mode, having just being defeated by Tampines’ eastern rivals Geylang United, a defeat that sent the Cheetahs to second last position in the table, and also caused Alex Weaver his job.

However, since the postponed game, apart from the defeat against Balestier Khalsa and the much-questionable fixture against the Warriors, the Cheetahs have been slowly picking up the points, starting from the well-deserved victories against Harimau Muda, Home United and Courts Young Lions.

The month of May have been a turnaround for the Cheetahs, and its about the right time that they faced the Champions, Tampines Rovers.

The Stags were the only unbeaten team in April, up till they were defeated by Tanjong Pagar United  two weeks ago. Since then, every team in the S.League believes that they are the team to be beaten, and perhaps Hougang would do the league a favour by not letting them be the runaway leaders.

Surprisingly, the Cheetahs were the only team that Tampines have failed to beat last season. A last minute goal by Benoit Croissant saved the blushes of the Stags in Clementi last season, while Mamadou Diallo managed to stun the Stags with the same 1-1 scoreline in Hougang.

With Robert Eziakor setting the Prime League team to light with his performance against Warriors FC in midweek, he is set to take his place, either in the bench or the starting lineup. With Faizal Amir suspended, Jeremy Chiang looks set to take his place at right back, with Syaqir Sulaiman and Hasree Zais restored as the first choice centreback pairing. This looks set to be another big performance for the Cheetahs, espcially with their three straight wins. A win, and they will jump over Woodlands Wellington in sixth place. A fixture against a struggling DPMM awaits them three days later.