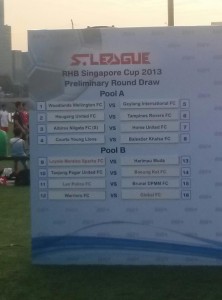 Hougang have been drawn against S.League Champions and last year’s runners up Tampines Rovers in this season’s RHB Singapore Cup Preliminiary Round.

The RHB Singapore Cup 2013 Preliminiary Round Draw was conducted at the Marina Floating Platform on Sunday Evening, and were greeted by fans and the local public alike – to much fanfare.

There was a mini charity 5-a -side tournament, as well as a game, where fans could win a car by kicking a ball into a container situated in the Marina Reservoir. However, the highlight of the day was a chance for fans to mingle with the S.League players.

Last season, Hougang were drawn against Tanjong Pagar in the preliminiary round, where the Cheetahs advanced through penalties. However, the Cheetahs lose 3-2 on aggregate against Gombak United, who decided to sit out this season.

The Cheetahs will gain home advantage this round and the preliminiary rounds will be played in June.