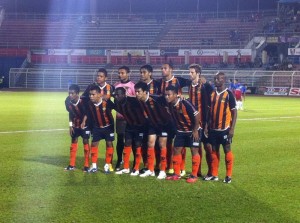 The Cheetahs fell to their first pre-season defeat, at the hands of the Southern Tigers yesterday at Larkin Stadium, Johor Bahru.

Goals from Azinee Taib (2) and Mohd Muslim condemned the Cheetahs to a 3-0 defeat, which goals likely caused by defensive errors.

After a good start by the Cheetahs in the first five minutes, a backpass from Shahir Hamzah was led to stand-in goalkeeper Ridzuan Fatah. However, his clearance was caught by Azinee Taib who slot a simple goal past Redzuan Fatah.

After the goal, the Tigers were the dominant force and outplayed the Cheetahs in every department. The Cheetahs were forced into more defensive mistakes, however, the backline of Syaqir Sulaiman and Shahir Hamzah managed to clear it off, before any fatal strikes occured. However, they concede the second goal from another defensive mistake.

Johor’s captain Safiq Rahim freekick was met by an unmarked Azinee Taib, and he dived the ball past Ridzuan Fatah to put Johor two goals up at half time.

After the break, Alex Weaver sent his no.1 goalkeeper Fadhil Salim and the ever-improving Fairoz Hassan. It almost paid into dividends when Fairoz thunderbolt his freekick towards the Johor keeper, but he managed to punch it out.

The day turned into misery as Cheetah’s concede a late third goal, this time by Muhammad Muslim at the dying minutes.